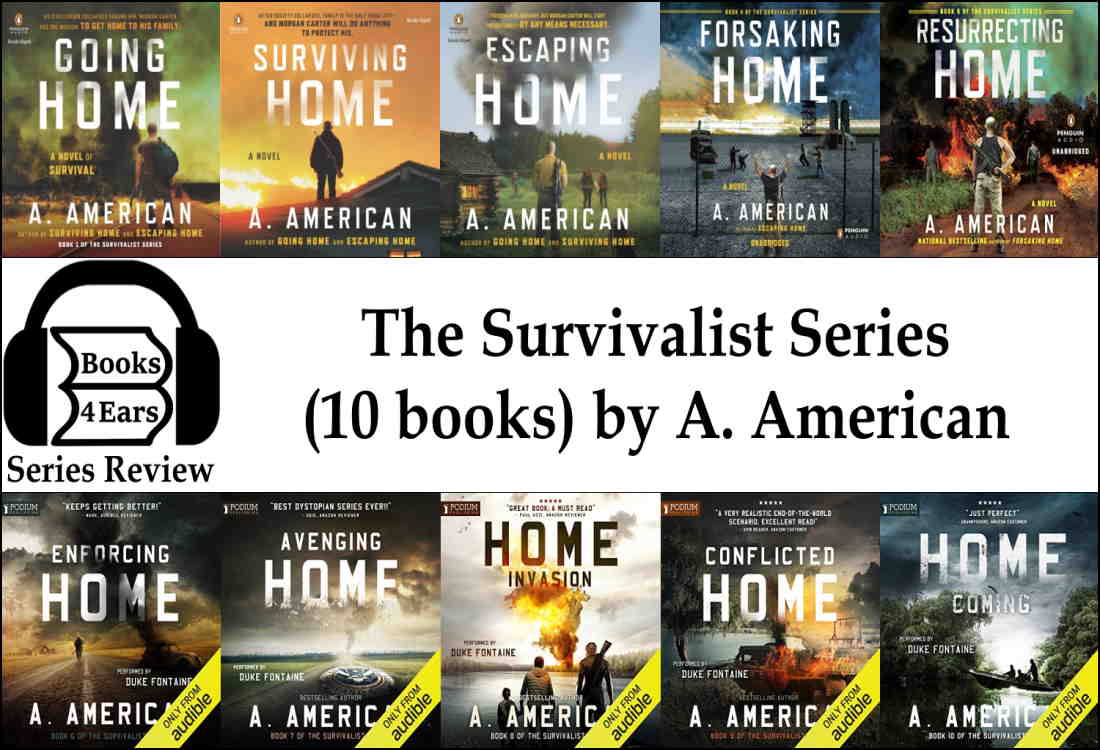 I thoroughly enjoyed the entire ten-books that make up The Survivalist Series. The books flow well together and rarely disappoint when it comes to fast-paced action. Angry American does a great job of balancing character and relationship building with a steady flow of action and drama.

I do, however, have a few criticisms to offer a little later. As with any book series, this one has both good and not so good points to be made.

My job is to help you navigate those points so you can make the best decision for your tastes before spending that hard-earned money or credits.

I’ve “listened” the first four books five times each and the last six will be four times each. That in itself should speak volumes about The Survivalist Series. It truly is that good.

Angery American needs a huge attaboy for keeping the same narrator throughout all ten books and six years. That is quite an accomplishment and I imagine it wasn’t cheap or easy. So thank you for that Chris.

Theme prevailing theme of the entire Going Home series (The Survivalist Series) is to survive, judge and conquer. Many would argue this point so I would ask the reader to sit back and take an honest plot appraisal as they navigate through Morgan’s thought process as he takes arms to defend, punish or threaten.

This, in my view, is not a bad thing, not at all and the author hides nothing when it comes to exactly what Morgan is thinking. Much of this span hundreds of years into the past when hard people made hard decisions.

In the world we live in today, such brutal decisions would make widespread news followed by social media commentary as the courts decided the unfortunate fate of someone so cruel as to decide another’s fate. See the irony? That ridiculous aspect of present-day life is destroyed in the blink of an EMP and is actually much of the secret appeal for many readers. Will you admit it?

Click on the book title for my individual reviews and character lists.
– As an Amazon Associate, I earn from qualifying purchases.

Unrealistic scenes: While I give a ton of leeway to fiction, I have found myself on more than one occasion feeling some of the scenarios are a little unreal. Things like Morgan allowing his little girl to stand guard, go on patrols and fight in a war. Or that civilians (Morgan, Dalton, etc.) would be allowed to go out on missions with the military. But hey, like I’ve mentioned before, no one is up in arms when Thor kills giant alien monsters or Iron Man starts a flying aircraft carrier with his flying metal suit. Sometimes we need to just sit back and enjoy the show.

A little chauvinistic? Many reviewers complained about some chauvinistic views in this series and I can see some of that myself. I will say that if Mel is a little whinny, is that really unrealistic? I mean, who doesn’t have those whinny family members in their own families? I think because she’s a female it seems to bother some readers.

The idea that many of the female characters were weak was evident, at the beginning of the series. I do feel that the portrayal of woman has improved substantially with each book and is barely noticeable by book five, Resurrecting Home. By the last books, Morgan’s daughters are shooting and scooting and Mel is armed as well. No one would want to faceoff with Jamie.

First and third-person switching: Okay, this is something that seems to bug the mess out of some people but, as cool and relaxed as I am, it wasn’t that big of a deal for me.

For the most part, the books are a little short for my taste. While some of the audiobooks are super short, the average listening time is just under 10 hours and 50 minutes long.

I know I’m a total geek for breaking it down like that but I’m working with rusty equipment. Hopefully, the effort helps someone else.

Caution: Some of the character descriptions below might spoil unread book stories.

(Other names and mentions are listed in each individual book review)

The Survivalist Series Author: A. American