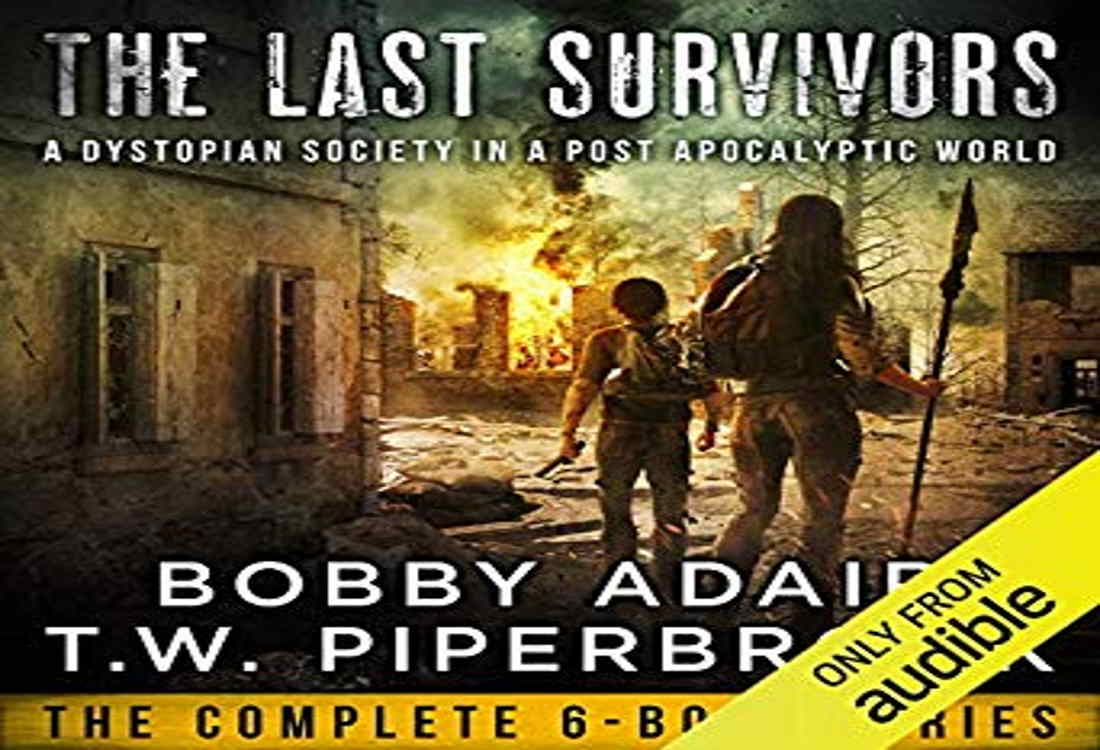 A Dystopian Society In A Post Apocalyptic World | Books 1-6

The Last Survivors is a different type of post-apocalyptic story. This storyline is set 300 years after the world ended as we know it.

Imagine a horrible virus (wind-borne spores) has taken out most of the World’s population and only remnants of people managed to survive in pockets of communities.

Now imagine a tragic epidemic so severe and the survivors were so few there was no one left to run the world. Things like electricity, running water, phones, machines, electronics, even modern construction and medical care – all gone.

After generations of insufficient education and declining lifestyles, the future reverted back to medieval times – a dystopian society.

Today’s buildings and landmarks turned to relics and ancient ruins. Today’s cities become ancient cities too dangerous to build a life in. Not just in structural dangers, the infected gather there. They are everywhere.

Villages are governed by tyrants much like we’d imagine that of King Tut enforcing barbaric practices. Actually, not too far removed from what we have in office today. LOL

I do have to mention there are few twists and turns and no real Surprise “Gotchya” moments but sometimes that forward-moving scenario is what the librarian ordered.

Give It A Chance – At Least A Few Chapters

This audiobook gets better as the book progresses. I can tell from some of the negative reviews on Amazon that the readers didn’t give it a chance. The “ancient” theme alone takes some getting used to and it’s as if the authors’ creativity did as well. By the last third of this book series, I was glued to the speakers and couldn’t wait to see what happened next.

The characters in The Last Survivors are fairly typical to most books, the good people and the bad but Bobby Adair and T.W. Piperbrook did a fantastic job of keeping the balance between relatable and interesting.

A mother that will do anything to protect her children. Rulers that kill with “pire” and spikes that put more thought going into their morning breakfast. The typical love affairs, deception, betrayal, undying loyalty and barbaric deception – it’s all there ready to keep you entertained for hours.

At times, with its dystopian culture, ancient cities, cleansing with pires, etc., it’s a little difficult to remember we’re looking 300 years+ into the future, not the past. But it makes sense that that’s a possible scenario with a worldwide epidemic that kills off everyone other than small pockets of uninfected.

Mushy-gushy overkill: It’s not a dealbreaker in my book but the story does get into a little mushy feeling at times. I don’t mean touchy/feely stuff, just the character’s thoughts, especially when thinking back. Maybe it’s just me but I can’t imagine normal people with that degree of thought going into every feeling.

Little oddities: This is very minor and I wouldn’t have noticed had I not been listening to an entire boxed set (Six books) all at once. For example, on several occasions, main characters “bit their lip” out of extreme emotion (not a bike accident) hard enough to bleed. Okay, I have to call B.S. on that degree of emotion. Who does that? No sane person does that.

Unbelievable scenes: I have to admit, as well thought out this book was, there were times I found myself saying, “That wouldn’t happen” or “What about this or that, it doesn’t make sense“.

As an example, for whatever reason, I had no problem believing in a three-hundred-year-old infected ancient person, but thousands of people feeding themselves on gardens and rabbits? Now that took me out of the possibility realm.

Sean Runnette is a talented narrator and he doesn’t disappoint as he guides you back and forth between violence and the touching – the fight for power and the struggle to survive.

The Last Survivors Box Set is absolutely worth the credit if you’re using Audible, in my opinion.

We’re looking at a total of six well-written and expertly narrated books totalling over fifty hours of enjoyment – For ONE tiny credit.

Overall, I’m giving The Last Survivors Box Set a whopping four and a half stars. It’s not a Steven King novel if that’s the kind of book you enjoy, but it’s well written, has a unique story within a very popular genre and keeps you coming back daily. At least it did for me.

Without spoiling the story, I do want to mention the author has no qualms about building your “relationship” with a character, just to have them brutally murdered before your ears. This is a good thing, I think. At least it is for me.

I do, however, understand some will consider this a negative. I prefer that everything was not all puppy dogs and rainbows. Some true hardship and not so happy endings (That’s not a hint, you’ll have to see for yourself how the story ends.) never hurt anyone. Unless it killed them, that is. 😉

This book series might not be the best choice for beginner audiobook listeners. Not that it is overly difficult or anything like that. There’s a lot going on at once. This is normal, I think, for good fiction, but it may be a little overwhelming while you’re trying to become accustomed to a stranger reading a book to you.

Also, it’s just so long. Over 50 hours. Personally, I seek out those longer books boxed sets. Using a single credit for six books is a bargain.

As if fifty hours weren’t enough.

It wasn’t until the very end of The Last Survivors that I found there is a sequel to the series, The Ruins: A Dystopian Society in a Post-Apocalyptic World.

The story follows Bray, William and Kirby as they leave Brighton and look for better lives. This is a four-book series, so far, and written by T.W. Piperbrook alone and Narrated by Sean Runnette.

I have not had the chance to listen or read the sequel yet but I am looking forward to it. At my age, I need to get to it soon before I start forgetting some of the stories from The Last Survivors.

Between the four audiobooks, you get another thirty-three hours to the story, They are in my wishlist right now.