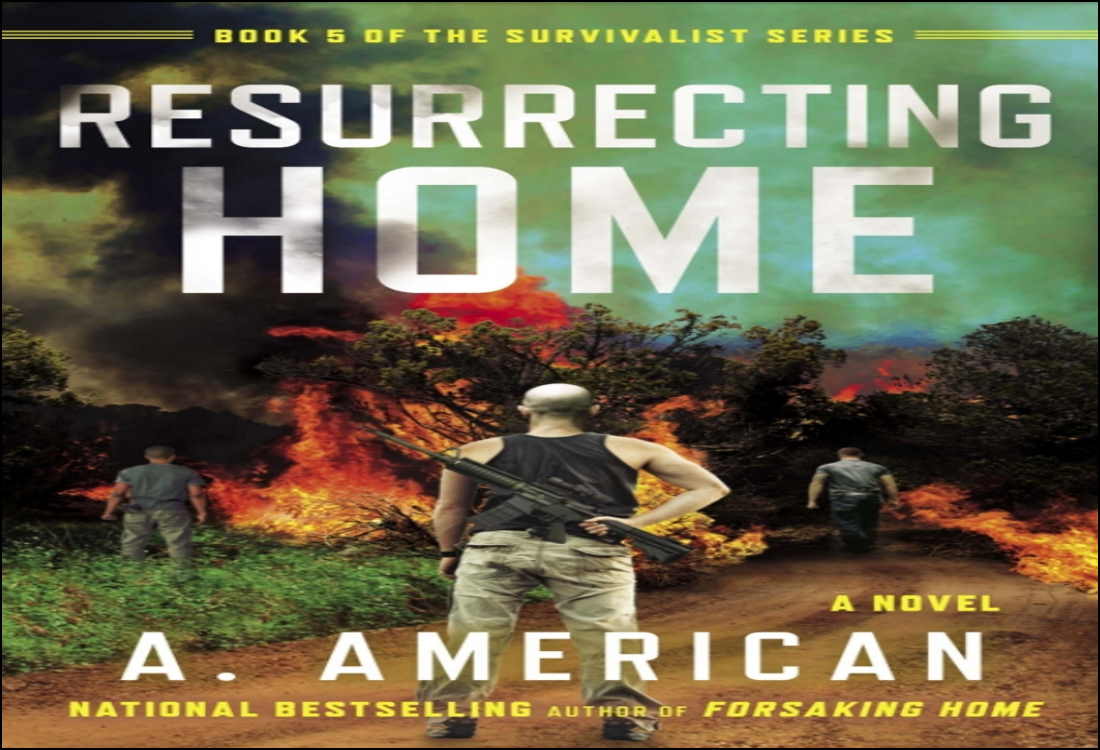 Resurrecting Home is book five of The Survivalist Series. Morgan, along with his family and friends, are back in their old neigborhood after being forced to bugout by the DHS. Morgan, Mel and the kids are in a different house but they seem to be adjusting well.

With the former DHS camp under the control of the National Gaurd, you’d think everything was hunky-dory now, right?

Nope, there’s plenty going on and almost an unlimited supply of action, violence and comradery.

We have a massive forest fire, loose DHS agents running around as civilians, the strong preying on the weak and even an unexpected job title for one of the main characters. (Vague as not to spoil anything for you)

The author continues to build the storyline with a handful of new characters. A. American also promoted previous people into main characters. The list of characters has grown considerably. Duke Fontaine continues to knock the narration out of the park.

I’m going to give Resurrecting Home home 4 ½ Stars. It is, I have to admit, a weak 4 ½ and I considered dropping it to a solid four stars but there was too much good about this book to justify it. Times like these almost make me wonder if I shouldn’t have gone with a quarter star rating system rather than half stars.

The book was fastpaced and interesting enough for me to enjoy listening to it for the fourth time. Yes, I’ve listed to this audiobook four times. In fact, I knocked this one out in a single day, albeit at 1.6 speed for this review but I still enjoyed every word, even while taking review notes.

Skip this section if book Four is still fresh in your memory.

In the last book, Forsaking Home, Sarge and his crew, with the help of Captain Sheffield’s National Gaurd unit, took over the FEMA camp where Jess, Mary and Fred were being held.

Eric and Kay broke the girls out just as Sarge was taking over the camp. Eric and Sarge shot each other.

Morgan, family and friends got to move back home now that the DHS has essentially been neutralized. They invited the family in the woods, originally from Daytona (Tyler, Brandi, Edie and Jace) to move into one of the empty homes in their neighborhood.

Sarge, after a few days in the camp infirmary, moved into Mogan’s bugout cabins on the river for a little well deserved R&R.

Captain Sheffield and the rest of his unit have converted the FEMA detainee camp into a refugee camp.

Resurrecting Home is an obvious selection for fans of post-apocalyptic fiction, dystopian type of stories. Preppers and survivalists will love this book.

Don’t get me wrong, you don’t have to be a prepper to like this book. There are some very human aspects to the story and the author does a decent job at character building, albeit in a fastpaced, step-by-step manner.

If you get a little frustrated woman being portrayed a little less heroic or aggressive as men, this book might get under your skin.

I do have to acknowledge an improving image of the woman in the series as the story progresses. By that I mean book one was a little more severe on weak female identities than book two and now, in book five, we’ve seen a lot of improvement in female roles.

If unnecessary details about things like guns and gear bother you, the author does that throughout the series. I’m a gear nut myself (Don’t tell anyone) so I find it an added bonus but I see where it might bother a few people.

Violence: Only if you think shooting someone in the face or smashing their hands with a hammer is violent. Otherwise, it’s almost fluffy kittens and mommy hugs.
Profanity: They cuss. Not as bad as in my house but there is a little profanity.
Sex: Nothing beyond a little pathetic flirting.
Alcohol/drugs: A little drinking and “medicinal” weed but nothing to really worry about.

Other names and mentions in Resurrecting Home

While book five didn’t seem quite as “action-packed” as the first four books, it was still a great listen. I was definitely slower-paced and seemed to bog down in places. Having read the entire series multiple times at this point, I know book five was one of the less exciting of the 10-book series.


Get this book on Audible. If you’re not an Audible fan, get it on Kindle or paperback. I don’t think you’ll be disappointed.