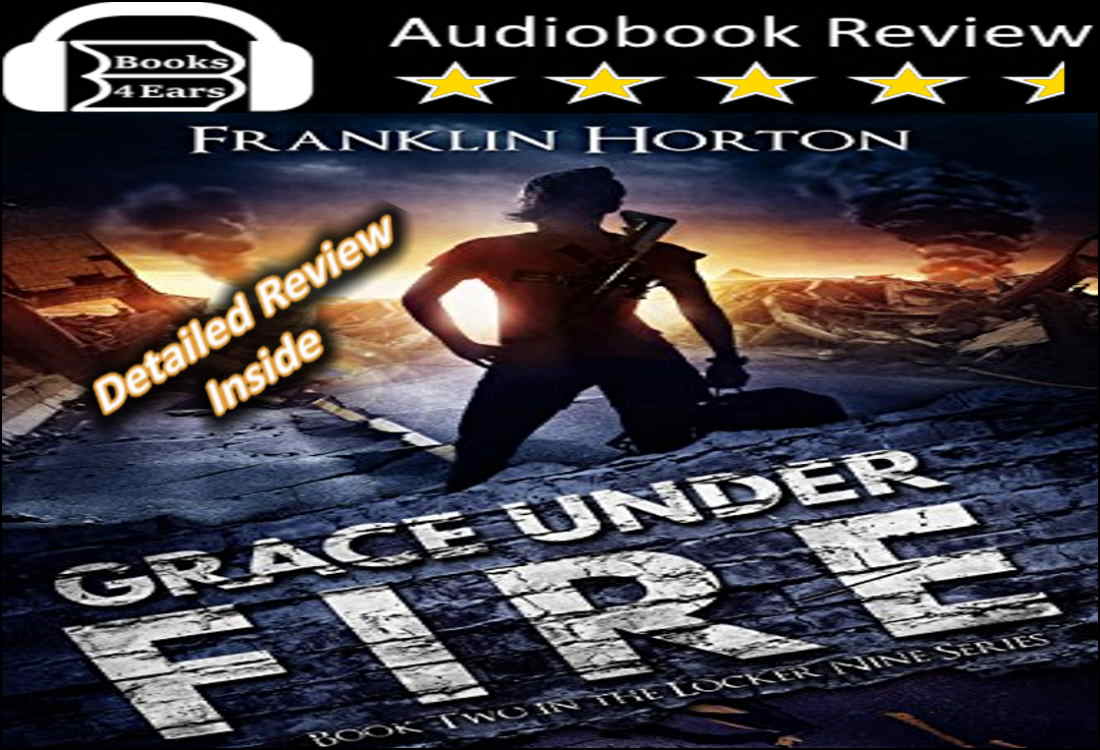 In Grace Under Fire, Grace and her Dad are at Arthur Bridges’ compound, along with Sonyea and her son, Tom. They still need to get home and the danger of travel is getting worse.

Grace and Tom snag a ride on a helicopter while Grace’s dad, Robert stays with Sonyea until she’s well enough to travel.

They needed the gear to live out of their Go Bags for a couple of days if it came to that. Plans were constantly changing, expectations constantly shifting.

The helicopter takes fire and has to drop them off in a parking lot where Grace and Tom are overrun by gun-toting hippy-hiking invaders.

To make things worse, Robert and Sonyea are stuck on Arthur’s compound as a highly armed and professional group try to take the place over by force.

A new charismatic and slightly laid-back character is dealt into the cards in book two. As a dad himself, M.M. is willing to risk a trip of 70+ miles to check up on a friend of a friend’s daughter he’s never meet. Grace is fortunate to have friends of this caliber in her orbit.

Gamma Ray may be dead but there’s no shortage of nutjobs, even right there in Damascus, Virginia. The Hardwicks and their friends have to fight to keep their home and to stay alive.

It would be so much easier if the family weren’t so damn fragmented at the moment.

I love the action in this book. Grace Under Fire is not so unrealistic that you roll your eyes and the flow is perfect.

The book isn’t all action. There are touching moments as well. Also, Grace may have become a hardened fighter to fear but she is a young lady as well. And she does have a romantic side, which you see as she begins to have feelings for another.

I love the story and narration. Grace Under Fire is as good as book one, Locker Nine and I can recommend the listen just as easily.

This is another amazing book that’s too short for my taste.

I’m giving Grace Under Fire four and a half stars. If it were over, say ten hours, it would have been a five-star book.

After Grace exchanges fire with an intruder, her mother says to let him go. And she does. I call BS. Grace is too smart to allow an armed intruder time to regroup and come at her and her family again.

Teresa had just gotten to the house as Grace was firing at Paul.

“I’m going after him!” Grace yelled.

“Leave him! You help Mrs. Brown into the house. I’m going to check on the kids.”

Grace was hesitant to leave an armed attacker alive on their property. It went against everything she knew. She had him on the run and she should have finished it. Giving him time would only allow him to strategize and come back when it was advantageous to him. Still, she did as her mother asked.

On his way back home, Conner meets a boy named Pete, who calls his mother, Ellen, to offer aid to the traveler. This is a literary easter egg with a cameo of Ellen and Pete, Robert Hardwick’s wife and son in The Borrowed World Series.

Here’s a small excerpt from that scene;

My dad has a pile of old bikes,” the boy said. “If I get you a wheel, how about you just put it on and get out of here, okay? Strangers make me nervous.”

The boy pulled a walkie-talkie from a pouch. “Mom, you around?”

It took a moment, but a reply came. “Everything okay, Pete?”

“There’s a man passing by on the road. He needs a bike wheel. I think we should give him one to get him on the road.”

“You didn’t tell him that your father wasn’t home, did you?” Ellen asked.

Pete looked at Conor, who’d clearly heard the comment. “No, but I think he knows now.”

Excerpt from chapter 39 of the book, “Grace Under Fire“.

A coordinated terror attack on hundreds of locations across the US has left devastated Americans at a level of desperation that we’ve never seen. The power is out, the freeways are closed and gas sales are illegal.

Grace and her best friend, Zoe, have to leave Oxford and try to get home in the chaos.

The girls run into trouble causing Grace to dispatch bad guys and fight for their lives.

Maniac and psychopath gamer (Gamma Ray) goes on a killing spree, racking up points in the game of real-life and death.

The girls make it to their second gold-star safe house set up by Robert Hardwick, Graces dad. The prepper homestead is owned by Sonyea Brady and her son Tom.

While Grace and Tom are checking with a local ham radio operator, nut job Gamma-Ray attacks Sonyea and Zoe. Sonyea is hurt badly and Graces best friend, Zoe, is murdered. The house is burned down.

Grace, Tom and Sonyea make it to the next designated stop, Arthur Bridges’ compound. The book ends with Grace finding her dad waiting for her at the compound.

Other names and mentions in Grace Under Fire