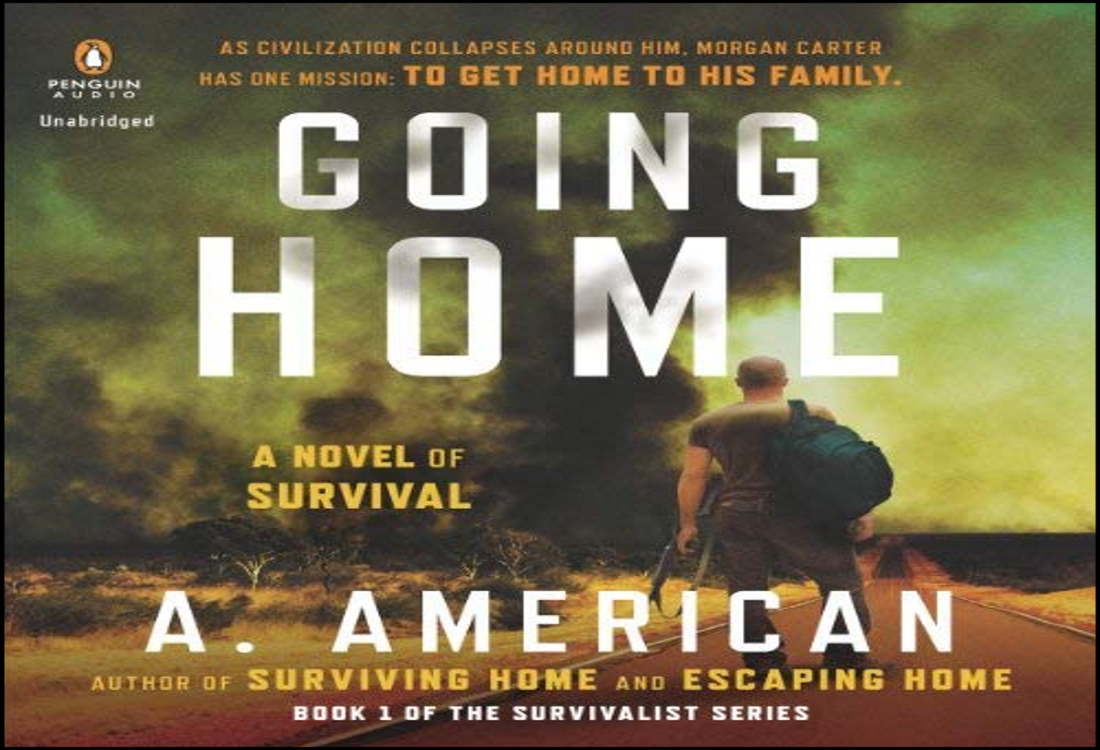 Going Home is the first book of a ten-book series that is likely to tempt hours and hours of listening time from you.

The story wraps around a prepper and survivalist stranded far from home when an EMP burst brings the country to her knees.

With no electricity, cars, electronics or law, his 250-mile walk home becomes so dangerous he, and the people he hooks-up with must decide to kill or be killed.

Five Stars – Hand’s Down. Let me tell you something. Out of the 290 or so book titles in my Audible app., Going Home – A Novel of Survival is near the top. The Going Home Series (Officially titled, [book-series]) by A. American is in my top three best audio books.

Seriously, this is one of my favorate audiobooks. It’s right up there with One Second After. I think I’ll listen to that one again for our next book review.

Without giving too much away, the main character, Morgan Carter, is a survivalist/prepper. Already sounds great, right? I know.

Morgan is on his way home from a business trip when, about 250 miles away, an EMP hits.

The EMP (Electromagnetic Pulse) takes down our entire electrical grid along with most modern vehicles and electronics. No cell phones, TVs, radios, GPS – all gone. In the blink of an eye.

Now that the Country’s been effectively sent back to the 18th century, it doesn’t take long for the unprepared to become desperate and for the low-lives to realize there isn’t much law enforcement to worry about anymore.

Suddenly, the Country has become a very dangerous place. And Morgan, without his car, must beat feet over 250 miles to get home to his wife and kids. He has an interesting trip, to say the least.

Morgan runs into some trouble as well as meet a few new friends that set the entire series’ storyline up.

Violence: Absolutely, a bunch of it.
Profanity: Yep, quite a bit of profanity.
Sex: Nothing graphic.
Alcohol/drugs: A little drinking, nothing too extreme.

Other names in book one, Going Home:

Before bringing this up, I want to mention an author of post-apocalyptic fiction, as with any suspense, mystery or action novel, has to balance between reality and believable entertainment. I’m a book reviewer, not a book author but here are a couple of things I noticed but certainly aren’t a dealbreaker.

The writer has to keep things interesting and this author is very good at that.

Since I have little negative to write about Going Home, or “The Survivalist” series for that matter, I’ll jump straight in and address one of the biggest complaints I see in some of the reviews.

Morgan’s a prepper and survivalist: Okay, I understand from many of the negative reviews that the idea of Morgan being a prepper didn’t bother most people BUT the fact that the author decided to give exact gear names and descriptions did bother a few. I don’t see the big deal but let me give you an example using an excerpt;

“Lying on the passenger seat was my everyday carry, or EDC bag, a Maxpedition Devildog. I am a gear freak and love Maxpedition products. I unzipped it and pulled out my Springfield XD .45 and tucked it into my waistband on my right side and covered it with my shirt.“

I didn’t have a problem at all with it and, honestly, if those listeners had just given the book a chance those little details were pretty much concentrated to the beginning of the book when Morgan was packing his gear and preparing himself for a very long walk home.

There are other instances sprinkled throughout the book but I don’t think it was overkill. If that kind of thing bothers you though, Going Home may not be the best pick for you.

As someone that tries hard to be as prepared as possible, I found those details inspiring. In fact, I carry more equipment than Morgan and much of the gear he describes, I own myself.

The violence came a little too quick?

Again, without risking spoilers, I found a few reviews where the reader/listener felt the violence brought on by the EMP came a little too soon to be completely believable. I do agree with some of this. I want to believe that with zero news via TV or radio that it would take longer for people to begin behaving like that. At least I’d hope so.

It’s worth two credits so you should jump at the chance for a fantastic audiobook like this for just a single credit.

By now you understand that I love the book and recommend it wholeheartedly. It’s one of those stories where you can’t help but become a little attached to the characters.

You want Morgan to get home to his wife, kids, and friends. You want his new companions to get where they’re going but to somehow stay in the story.

Get the book and add the other nine to your wishlist. Wait for an Audible wishlist sale and buy the rest – if you find the first book of the series worthy that is. That’s what I did. No way was I going to wait five months for this series, at two credits a month. I’m a Platinum member.

Let me know what you think.