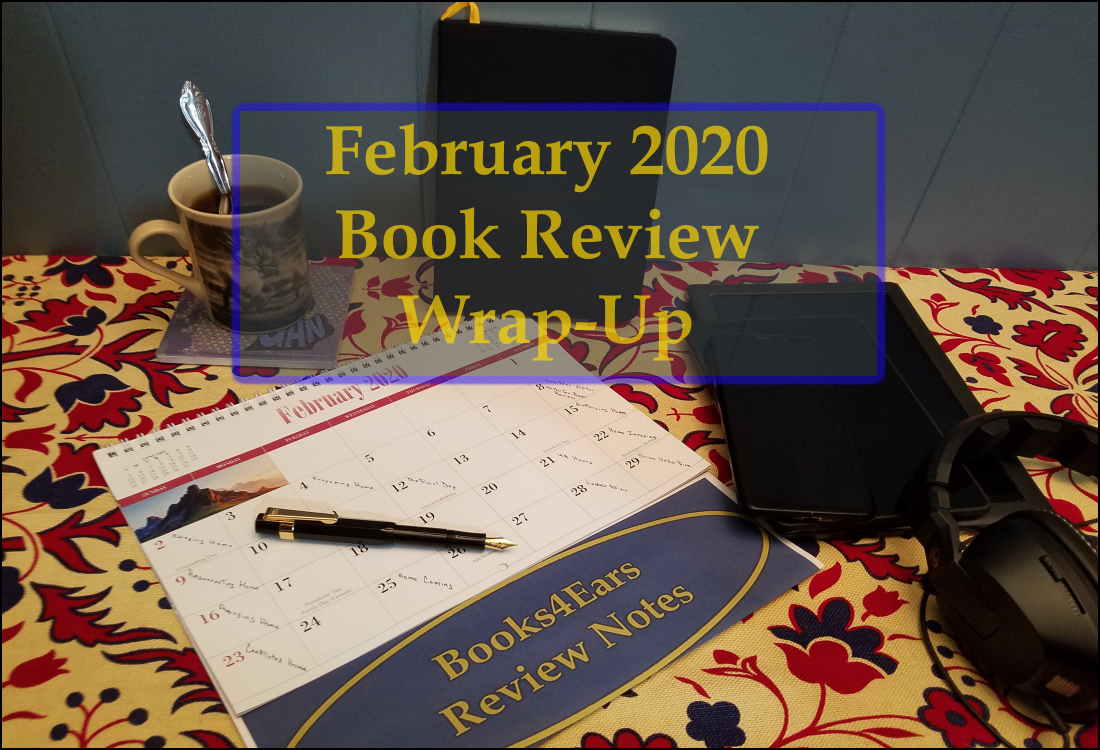 February is my first full month on this book blog. It’s a short month, even with leap year, but I feel pretty good about my efforts. Most of all, I enjoyed the books and reviewing them.

I should mention that many of the books I read won’t show on these wrap-up posts or in the Books4Ears reviews. Those are the physical and Kindle books I read. This blog is for audiobooks only. The only exception to that is those that I practice Immersion Reading.

In February I listened to thirteen audiobooks. Twelve were on Audible and one was on Chirp. I’m new to Chirp and so far I’m impressed. I’ll offer a full review once I feel I’ve used it enough to be completely fair.

Two of the books were from the series “A John Matherson Novel” by William R. Forstchen, finishing that group as well. I still need to put together a series review for those three books. Perhaps I’ll get that done in March.

I finished and reviewed another William R. Forstchen book this month as well, 48 Hours. This was a standalone book and I believe the only “first-time” book I reviewed. All the others this month have been re-reads or re-listens. In fact, 48 Hours was the book I purchased through Chirp. It was one of their limited-time audiobook deals and it was a steal. I loved that book.

The other two book reviews were from the Locker Nine Series by Franklin Horton. The final two books of this series will fall under March. I do have all four books in my Audible library, having finished book 4, Blood Bought, back in August. As I mentioned, all of these books are re-reads or re-listens except 48 Hours.

I have all seven (so far) books of The Borrowed World series by Franklin Horton and since those are closely related to The Locker Nine Series, those reviews will happen soon. I don’t own any of The Mad Mick Series but that’s going to change since those books are a direct spin-off of Locker Nine.

I only put out one blog post for February. I started a couple of idea posts but they’re low priority at the moment.

I spent a lot of time working on pages since I began this book blog journey. The terms, privacy, about me page and things like that. Along with the theme and plugins I’ve been pretty busy behind the scenes.

My Geek Side – Cool Stats

In an attempt to spare you from my geeky side, I saved my useless stats for last. As you can see from the super-cool chart below, I published 14 posts. One blog post and thirteen book reviews.

I’ve increased my listening time since starting this book blog. Seriously, I had to cut back to only three regular podcasts and only one of those posts daily, or five days a week. The other two podcasts are shorter and are published once a week. After that, it’s onto Audible baby.

So I can’t tell exactly how many hours of listening this chart shows. It is from the Android Audible app by the way. It looks like a little over 80 hours in February.

Add in another eleven hours on the Chirp app for the book 48 Hours, and we’re looking at well over 90 hours of audiobook listening in 29 days. Is that crazy or what?

Actually that works out to just over three hours a day. It’s really more since I blog and read my Kindle on evenings and weekends but who’s counting. Right?

That’s a wrap! I hope to see your monthly wrap up and until next month, may every book you read bring you happiness. Brian