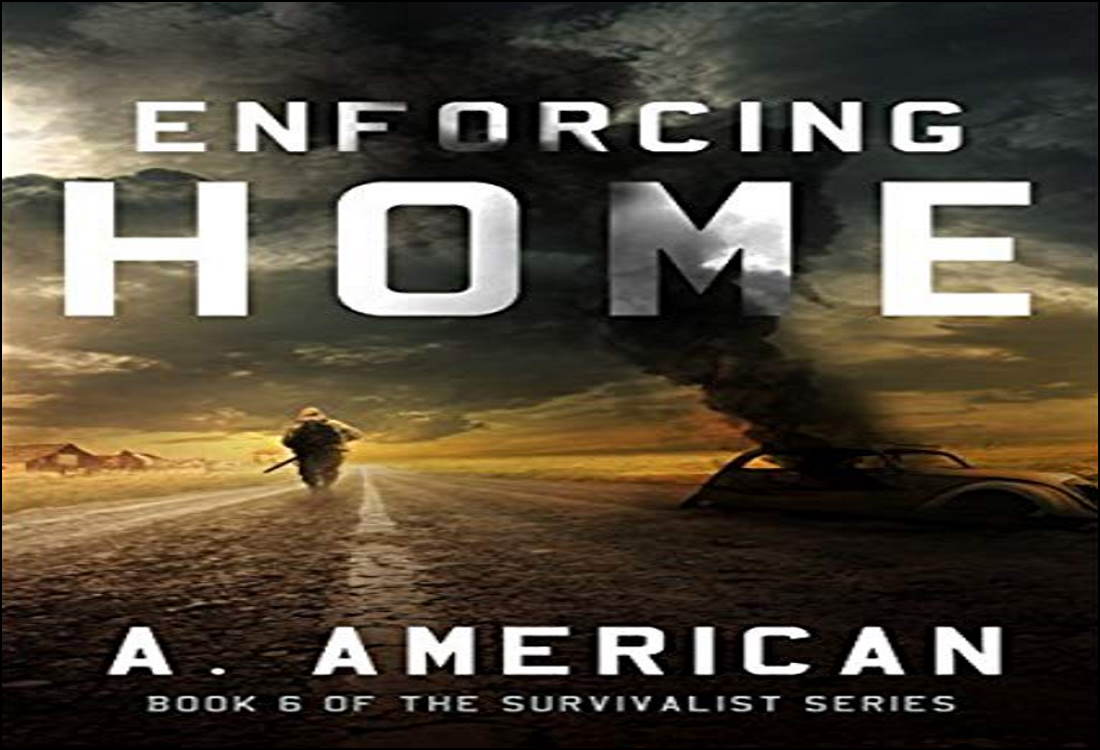 Let’s see, Morgan is Sheriff and he rides his horse into the sunset. Not true, Morgan doesn’t have a horse.

In book six, Enforcing Home, Morgan’s group of friends are being attacked by a new enemy that must be dealt with – people are getting hurt. Local troublemaker (Billy) and his followers are beginning to terrorize the community.

To make matters worse, an old thorn is back under their saddles and joining forces with the unlikely band of raiders aforementioned. Things are getting ugly. And dangerous.

In the meantime, surrounding towns are getting back into a lifestyle of trading and commerce. With the National Gaurd just a town over, Morgan and Sarge are making many trips back and forth and meeting with friends along the way.

There’s a lot going on in Enforcing Home. We have armed raiders attacking. The DHS is hellbent on revenge for Morgan and Sarge’s role in the camp being taken.

There are chicken thieves, pig thieves and murderers. Toss in some spies and invaders and we have a buttload of action going on in Enforcing Home.

There’s story behind the scenes as well. We have courtships in blossom, neighborly friendships building and even the community coming together for trade and food growing.

I like Enforcing Home a little better than book five and just as much as books two through four. I’m giving this book a strong 4½ Stars, all shiny and gold.

Skip this section if the first five books are still fresh in your memory.

Hold on to your bookmarker, I want to recap the first five books and have a lot of ground to cover. You with me? Come on then.

After an EPM attack, Morgan managed a 250-mile walk home. Along the way, he made some life-long friends; Thad, Jess, and Sarge. Now those friends are the main characters in the series.

Morgan, Thad and Jess all made it home to their families. Thad’s family was killed by the DHS and Jess lost her entire family as well with her brother dieing in the DHS camp.

Thad joined Morgan, Mel and their two daughters, staying in an empty home. Along with Danny, his wife Bobbi and the rest of the community that decided to stay, they fought DHS backed raiders. Reggie was killed and they were forced to bugout.

The entire community moved to some cabins on the river while Sarge joined forces with Captain Sheffield just up the river.

Jess, along with her friends, Fred and Aric, escaped the FEMA/DHS camp just as it was being liberated by Sarge and his National Gaurd partners. Aric got shot, as well as did Sarge. Kay and Mary stayed in the newly liberated DHS camp, now being run as a refugee camp by the National Gaurd.

After that the camp was liberated, Morgan and friends felt it was safe to move back into their old neighborhood. Along the way, they invited Tyler, Brandi and their kids. Oh, I forgot Dalton, who rode up on a motorcycle and now lives there as well.

Orders from command forced Captain Sheffield to close the refugee camp, transferring the detained DHS agents to another location although a couple of them did get away. The refugees are asked to leave and take care of themselves. Where’s that Interrogator, Raydon Niigata? He seems dangerous.

Then came the forest fire. As it pushed refugees and wildlife away, Morgan, Sarge and friends worked out a way to divert the threat of fire, eventually saving their homes as the rain finished off the storm.

The National Gaurd was assigned back to the armory. Jamie, Ian and Perez managed to get permission to stay in Morgan’s community.

Mary, Aric and Kay all ended up living in Morgan’s community as well. At this point, there are 17 like-minded people struggling for food and survival.

Now that’s a recap! I feel like I rewrote the entire series. I hope it helped. Now onto today’s audiobook review of book 6, Enforcing Home.

Readers of action, thriller, post-apocalyptic and dystopian books should like Enforcing Home as well as The survivalist Series.

For sure, preppers, outdoor survivalist types, pro-Constitution and those against abuse of power and authority will gravitate to well-written dystopian books such as this one.

Well, if you’re a stickler of details such as proper grammar and sentence structure, this book may annoy you.

If you don’t care for specifics, such as the name of a tool someone has, you may want to find another series completely.

If Those that haven’t read or listened to the previous five books, well… start at book one.

If you really love romance and touchy-feely books, well, you’re not going to find much of that in Enforcing Home.

Violence: If there wasn’t, I wouldn’t be writing this review. Yes, lots of violence.
Profanity: Some.
Sex: Nope
Alcohol/drugs: Some drinking

Other names and mentions in Enforcing Home