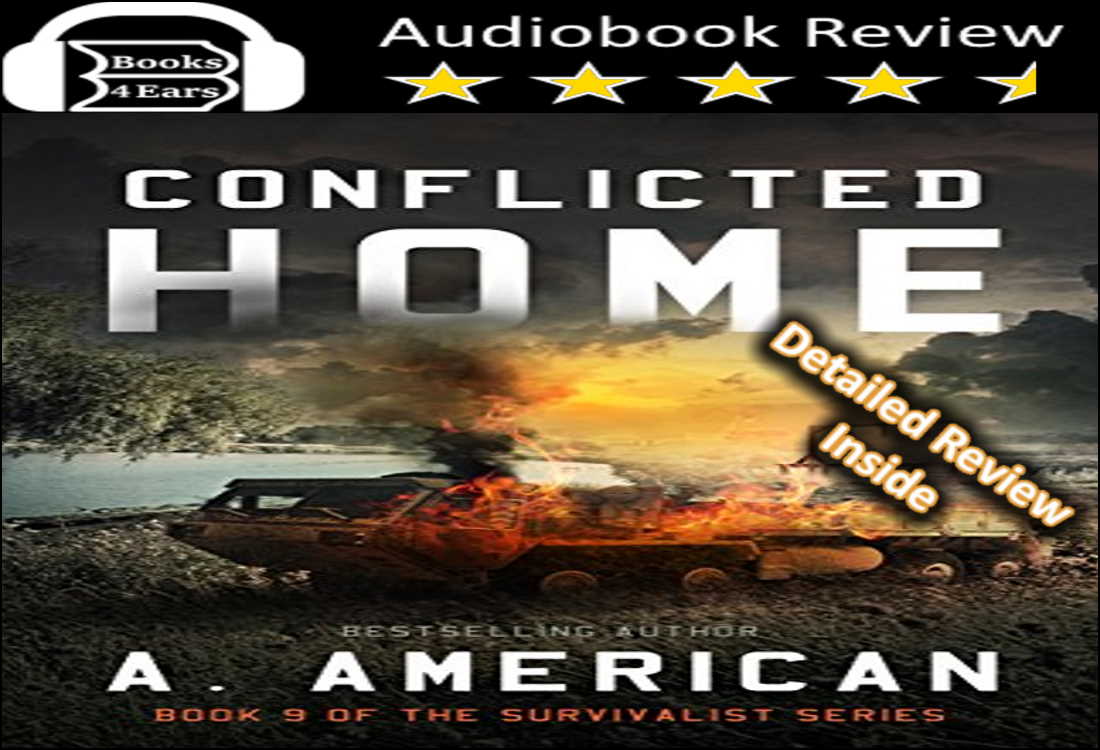 Conflicted Home starts right after book eight when Morgan wakes from being shot and then watching the triple hanging of the people that conspired to kill him.

Then, as we know, Mac Dill Air Force base was annihilated with a nuclear missile attack. That’s close enough to worry about nuclear fallout if the winds are right.

The big mission in Conflicted Home is a huge shopping trip to Eglin Air Force base. Yep, the old man’s taking the kids to the mall and they’re going to need plenty of space for the long trip back with the goodies.

It’s one thing to see someone from a distance that is suffering. But to get face to face with them gives one an entirely different perspective.

Heartbreak. There’s an attack and people die. Many are injured. We lose a well-liked character in the series and it might just bring tears to your eyes.

Someone’s getting more romantically involved than we’ve seen up to this point in the series. More than one couple? Is it Sarge? Does he cry? Involved in what way? I want to tell you sooo bad but it will ruin the book for you.

No doubt that this night no one was worried about anything. For tonight, we would be carefree. I drained the bottle in my hand and got up to go find my wife. She was in a dress today and I was out of uniform. I was going to get the most out of this situation that I could. Tomorrow would have to wait.

I liked book nine, Conflicted Home, a little better than book eight. The author did a nice job at keeping the flow natural and the plot consistent with the rest of the series.

More happened in book nine. A short book with a single main event leaves me a little underwhelmed and Conflicted Home overcame that from what we had in book eight. Conflicted Home is almost eleven hours long so that’s a plus as well.

There wasn’t quite as much blood throwing action as I prefer but the book kept me engrossed. Oh, and this is at least my third time listening to this particular book. That’s saying something.

Skip this section if book 8 is still fresh in your memory.

The Russians are invading? Yep. Did the Chinese nuke us? Yep. Are the Cubans on their way up from south Florida? Maybe. It sure looks like it. You’ll know for sure if you read or listen to Conflicted Home.

What were those Russians going to do with those spent nuclear fuel rods? Whatever happened to the engineers held captive by the Russians?

The community that Morgan built (Great book title, right?) is as strong and as close-knit as ever. It looks like Jess and Doc might be getting together.

Why is someone trying to poison the garden? You’ll find out in Conflicted Home, as well as who.

The power generation plant started. Now work is needed to string wire to where power it is needed. This shows a lot of promise.

There’s a new Judge in town and he’s even a prepper. That’s exactly how I’d write it if I were the author.

Tubby is dead. Long live the twinkie. Oh wait, was that politically incorrect? My bad.

Wow, Morgan was shot. Again! Dude’s like a lead magnet. Shut up, I know lead isn’t a magnetic metal. 😉 He’s alright but needed a few days of sleep – only to wake up just in time to witness a triple hanging. Life has truly rolled backwards in the apocalypse.

Other names and mentions in Conflicted Home