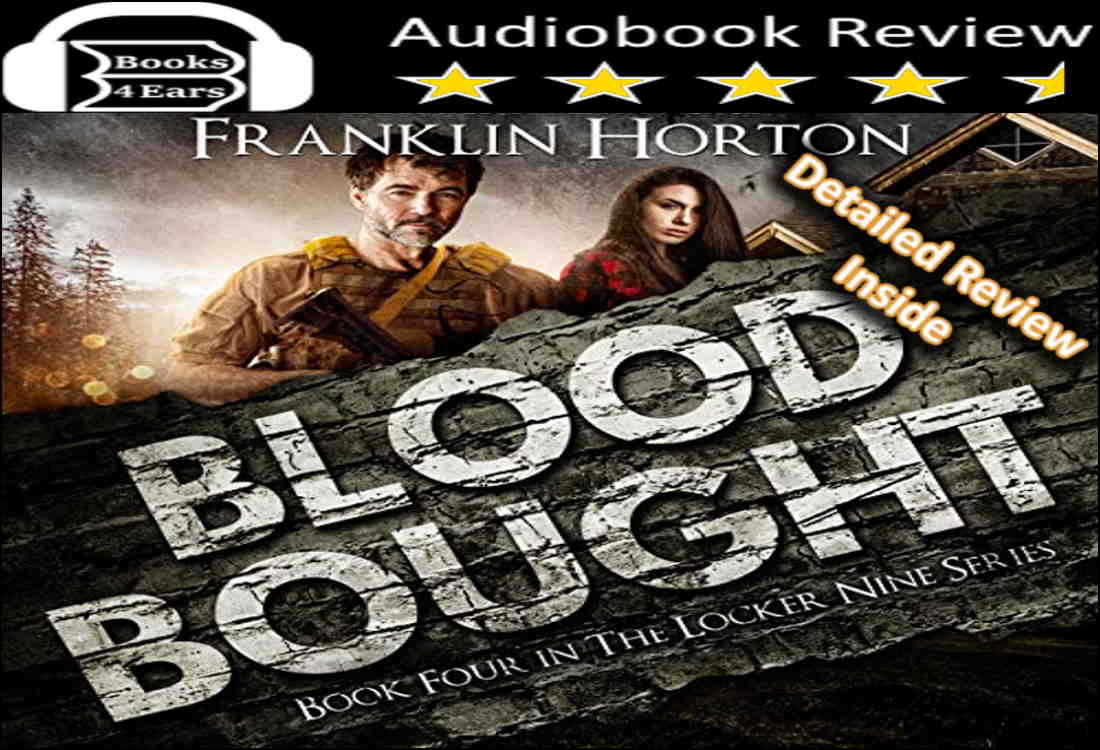 Blood Bought, book four of The locker Nine series, picks up after Robert and Sonyea barely survive the showdown with the congressman’s son, Jeff.

Robert, Sonyea and Brandon are on a helicopter heading to the Hardwick farm after Arthur Bridges paid for and arranged a flight home by Chuck.

They landed and made it home to find everyone alive and well but with the haunting understanding, a devasting danger looms close by and is more than likely barreling its way to take the Hardwick farm.

The same group of armed men with Congressman Honaker that was repelled by Arthur Bridges’ men are en route to take the Hardwick farm.

A band of armed hikers have taken over the town of Damascus, Virginia where Robert and Grace live. The hikers are out of food and resources and becoming desperate.

Leslie Brown’s daughter, Debby, comes back to bite the family in the rear. Grace should have taken her out when she had the chance.

Okay, I’ve been critical of Franklin Horton’s books when it comes to ending without any kind of closure at all. Most of his books should have been consolidated into a single volume. Horton redeemed himself with Blood Bought. This is the fourth book and I’m not sure if it will be the final book in the Locker Nine series but the ending does bring some closure and satisfaction to the series. For that, I thank the author.

With the absence of that one little issue, Franklin Horton is one of the finest authors of post-apocalyptic and dystopian fiction you’ll find. I absolutely love his work and Blood Bought is no exception.

Have I mentioned that I have listened to every single book in the Locker Nine and the Borrowed World series multiple times? That’s how much I love these books and now I have my sights on the Mad Mick series.

Blood Bought gets a solid four and a half stars. It is an exciting book and has a lot of heart. The story is believable, at least in my world of prepping and survival, and is structured for an easy listen.

The character development in this book, and the entire series, is solid and exactly what you’d expect from an author of Horton’s caliber.

Why not five stars? We’re back to audiobook length, my pet peeve. Even though I love the ending of this book, we’re still looking at a book under eight hours. To me, that’s a little short to ask for a full Audible credit, although at the time I didn’t think with about the purchase. I feel this way about most books under ten hours.

Tip: Many of my Audible purchases were purchased rather than using an Audible credit. Before using that credit, it might be worth looking at the value of a straight-up purchase.

I don’t believe I rolled my eyes a single time with this book. Excellent.

A series of terrorist attack throughout the United States leaves society desperate and dangerous. Grace is stuck in collage with her Friend Zoe six hundred miles from home. They need to get home before everything comes apart at the seams.

Grace’s dad, Robert, is a prepper and has already planned for and made preparations of just this type of event. He had a cache of guns, gear, supplies and instruction to help Grace get home safely.

The girls find trouble around every corner and Zoe doesn’t make it.

After several overnight stops with pre-arranged and vetted “prepper friends“, Grace makes it home with one of those friend’s son, Tom Brady.

They have a battle the moment they get home to the Hardwick farm with invaders that have taken over the home.

After a lot of fighting and turmoil, Robert and Sonyea Brady, along with one of Arthur Bridges’ men, Brandon Barton, make it to the Hardwick farm.

Now they are in store for another battle to keep the farm – and their lives.

Violence: Oh yeah, a bunch.
Profanity: Sure.
Sex: None.
Alcohol/drugs: Not really.

Other names and mentions